In the mid-1980s, screens displayed only text or animation until the development of integrated circuit technology makes LED display video technology possible. From then on, TV images can be directly displayed on the screens. Nowadays, LED display screens have been widely used in stadiums, plazas, shopping malls, and even streets. Lots of manufacturers have also begun to develop the mini LED display screen to provide a new user experience. 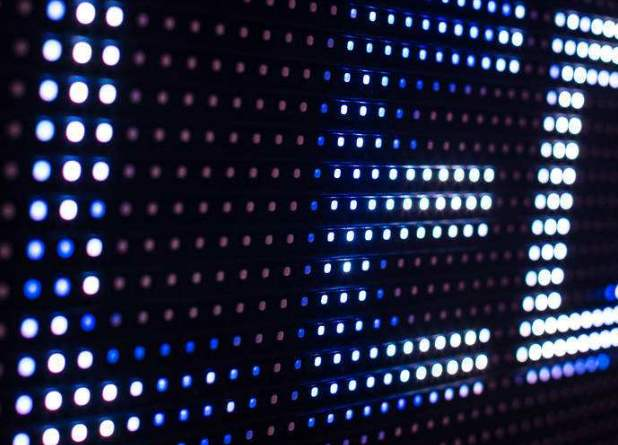 SMD, as known as surface mounted devices, refers to using surface mount technology to package LED products. It can encapsulate lamp cup, bracket, crystal element, and other materials into different specifications of lamp beads. When producing the display unit with different spacing for mini LED display screens, the lamp bead is welded to the circuit board by high-speed SMT machine with high-temperature reflow welding.

Considering the technical difficulty during the encapsulation, manufacturers prefer SMD to produce the small-spacing digital display screen. SMD is the primary technology for micro LED display screens with pixel spacing less than 10mm on the market.

On the other hand, COB, short for chip-on-board, is a new packaging technology that encapsulates LED chips, rather than LED lights, directly onto a PCB. Therefore, the COB-LED will be freed from the physical size of the SMD for higher resolution. Digital display screens in P0.5 mm, P0.6 mm, P0.9mm, and P1.2 mm are available with COB.

Compared to SMD, COB has several distinct advantages. The first advantage is high reliability. The death rate of mini LED display screens with COB packaging technology is far less than the industry standard.

The reason for the high reliability is that COB technology can eliminate the control link in the single lamp production process. In addition, it also removes the lamp bead over the reflow welding process, so that the high temperature in the traditional method will not affect the LED chip and welding line.

Excellent heat dissipation and oxidation resistance also contribute to high reliability. What’s more, COB adopts high standard coating technology to prevent LED display failure caused by water, moisture, UV, and other damages. It supports the all-weather operation and can still operate in extreme temperatures in 30 to 80 degrees. The comprehensive protective process prevents collisions or scratches. The mini LED display screens can even be cleaned with a wet cloth if soiled.

The second advantage of COB is that it is easier to realize mini LED display screens in small point spacing. COB is no longer limited by bracket size when designing lamp bead diameter. As a result, it can cover the market below P1.0mm that SMD technology cannot reach.

Furthermore, it is undeniable that COB has better physical properties. The modules encapsulated with COB are not only lighter than that with SMD but also have a larger view. COB can be bent at will, unlike SMD modules, which are generally flexible around 125 degrees.

With the information above, you may notice that COB technology is superior to SMD technology in LED display screen. And if you are looking for Micro LED displays, you may refer to some products of RIGARD. We have gained significant market share in mini LED display screens for numerous types. With TUV, EMC, CE, and RoHS standards certification, our products have a high reputation in the world. More information is available on the RIGARD’s website.