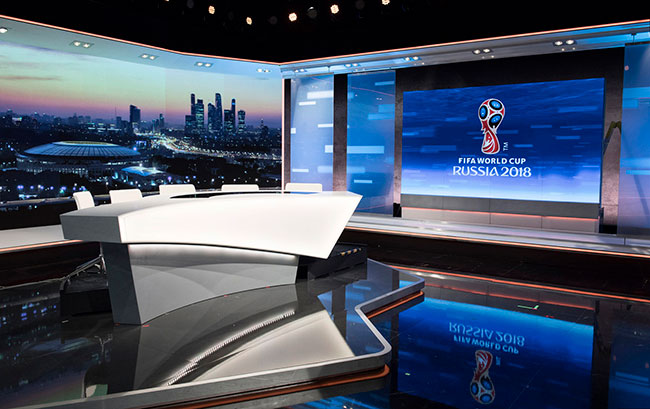 The 2018 FIFA World Cup is currently ongoing in Russia which started from June 14th and will end with the final match on July 15th, 2018. There are 64 matches in total held in 12 venues located in 11 cities. This is the first World Cup took place in Eastern European, and the first time the tournaments play on two continents – Europe and Asia. It attracts billions of people not only the loyalty football fans watching the grand ceremony and marvelous matches gathering the globe top football players.

This eye-catching event has become the most important advertising battlefield this year, where you could promote the products and companies, and get your domestic brand to be known around the world. Around 2.4 billion dollars has been invested in advertising. And the biggest part around 835 million dollars is from Chinese companies. Chinese also won the most FIFA sponsors numbers up to 7.

You will not feel strange when you see Chinese characters showing on the perimeter led display.

LED digital signage will be nearly found everywhere during the World Cup season. For example, in the large football stadiums, the digital signage can play advertisement that builds your brand,  and deliver information for fans, capture and maximizes the fan experience. And in the broadcasting studios, the true seamless fine pitch led digital wall help to create the immersive environments for TV-front fans.

LED display standing around the court(LED perimeter display): Advertise the brands for live and TV audience;

LED display in the studio: Broadcasting, replay and tactical analysis ;

*Cable-less design between tiles, fast assemble a led screen and get it to work in any urgent broadcasting event;

Although LED display technology has been rapidly increasingly installed in broadcasting studios, we still need to learn how it can be utilized for new sets. It is more involved than just hanging or holding a display on support.

During the studio set design phase, clients have many questions to ask and to be answered correctly, but in order to choose the correct and currently available LED display technology, more importantly, it is to ask the right questions and get the proper answers. In order to ask the correct questions, some basic things need to be considered including what is behind the technology, what is available, and how it interfaces with the broadcast studio infrastructure both electronically and physically without diminishing the integrity of the set design.

* Tile/Cabinet size ( The tile or cabinet is the largest active component of an LED display.)

* Signal processing (How the video signals are distributed and reach the display.)

The LED display systems have become the main design choice for studio video walls. Consulted with experienced LED display experts from the very beginning of the design, through the completed installation process, and use of the LED display system, is essential before making the decisions of what to use, where and how to make.

Rigard LED, the solution-based led display manufacturer has much experience in cooperating with broadcast system integrator and the best set designers. We are pleased to recommend professionals to you.

Want to join the discussion?
Feel free to contribute!

Why say that Mini LED,COB LED Display is the trend?